Is BoJo soon to be a Hobo? 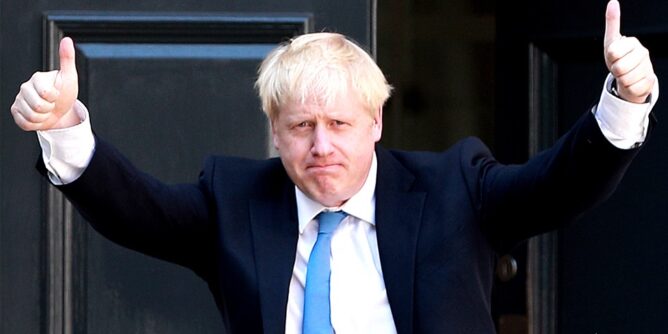 Prime Minister Boris Johnson is in a bad state right now. When he was sworn in, he was railed by the media for being the “British Trump”. Superficially, it’s easy to see the similarity. The hair, the bombastic personality, and the… well, it was mostly the hair. Now there are calls for him to resign. His popularity has plummeted across the aisle (unlike Juicy Stakes), despite his recent 180 on all of his Covid policies. For those that don’t follow British politics as a hobby like I do (because I’m a weirdo), you might be wondering, “What the heck are those Brits up to now?”

I honestly believe that 2016 is going to be looked back upon as one largest political upheavals in history. The two with the largest repercussions both happened on opposite sides of the pond. First, Donald Trump became the 45th United States President. Second, the Brexit Referendum happened.

If you’re unfamiliar with the terminology, a referendum is when the Parliament decides that the people should be allowed to directly vote on a specific issue. In this case, whether or not Britain should stay or leave the European Union. To everyone’s shock (including those that decided to have the referendum in the first place), the population voted to leave the EU.

The reasons why are too complicated to really dig into, along with the pros and cons of both staying and leaving. The main argument for leaving was that British citizenry felt that unelected representatives in Brussels had too much power over Britain and not enough representation for Britain’s interests. There was also the fear of mass immigration from the Middle East eroding away British culture and bringing disproportionate violence to the country.

The reasons to stay were a mixture of what was convenient and various economic worries. For instance, EU citizens had an easy time traveling across one another’s borders. Will Northern Ireland and Ireland have to set up a border? Who has fishing rights in the waters around England? Etc.

A by-election was held, as the Government felt that it did not accurately represent the people (most politicians were, and still are, pro-EU). In 2019, an election was held. The conservative party, abiding by their pro-leave promise, and Nigel Farage’s Brexit Party won landslide victories. Brexit was going to happen, and that’s how Boris Johnson arose.

READ MORE:  Everyone should know about MSME / Udyam

England went full nanny state, mandating masks, shutting down businesses, implementing curfews, vaccine mandates, and I’m sure plenty of other things I’m forgetting. The point is the Government completely overstepped its bounds and implemented measures that would have been considered unthinkable five years ago.

The “elite” really do think themselves above us, and this pandemic has made it more blatant than ever before. I can name dozens of politicians in the US alone that are blatant hypocrites. They implement egregious covid measures, shut down people’s livelihoods, prevent friends and families from visiting each other in hospitals (or even their funerals!), and then have the gall, the chutzpah, to throw massive parties with hundreds of attendees, maskless, and then brag about it.

This isn’t tin-foil hat conspiracy theories. You can google pictures of Obama’s birthday party. Nancy Pelosi is on video at a hair salon when all hair salons were forcibly shut down. AOC vacationed to Florida to party maskless. Gavin Newsome wined and dined with his Health Secretary maskless at expensive restaurants. Chris Cuomo. Lori Lightfoot. I could go on and on with examples solely from the US.

In England, the hypocrisy is just as rampant. Britain’s health secretary, the guy who implemented all the rules, was caught red-handed with photographic evidence of having an affair with his aide and traveled to her house when HE himself restricted travel and house visits. Yet STILL, the rules this guy implemented remained in place.

But, what really was the straw that broke the camel’s back, was Boris Johnson’s Christmas Parties. Pictures recently surfaced of various parties (yes, plural) and events occurring at both Boris Johnson’s residence and at No. 10, where government staff had get-togethers without socially distancing and when such gatherings were prohibited to everyone else. Oh, did I mention that one of these happened the night before Prince Phillip’s funeral?

At first, Boris Johnson denied that these parties ever happened in the first place, while at the same time claiming that, if they did happen, all Covid policies were followed. Which is a strange clarification for something that supposedly didn’t happen. Then, after about 20 days, he finally gave a pseudo-apology that really felt more like an “I’m sorry that I got caught”. There was also some claim that his wife really loves Christmas parties… which makes it okay? So I guess if I really, really like them, I can have one too?

Regardless of the pathetic excuses given, Boris Johnson was flat-out busted. Thankfully, it seems like the Conservative MPs can tell which way the wind is blowing, and some are now calling for Boris to resign.

In a move that was clearly made to save face, Boris lifted all mandates and restrictions on England. An important victory, regardless of the circumstances of how it was achieved. The trick will be to make sure it never happens again.

Internally, there are reports of the Conservative party breaking down. The Boris Johnson camp is considering running with “Operation: Save Big Dog“, which will involve firing everyone who doesn’t like Boris. The Tory Rebels, meanwhile, are considering “Operation: Rankine”, which is a reference to a very old scandal that I highly recommend looking up. It’s a roller coaster. The plan, though, is to replace Boris Johnson with literally anyone else, because according to polls, the Conservative party is dead in the water.

While Covid was certainly the tipping point, there were a lot of things building up to this moment. The first and foremost being that most Brits expected the conservative party to be, well, conservative. And they just haven’t. If anything, they’re Labor-lite.

For instance, one of the largest pressures that brought about Brexit was mass immigration. What has really been done about that? Zilch. The big open secret in England are the Muslim Grooming Gangs, which were exposed by the likes of Tommy Robinson. The stories of the victims of these are gangs are horrendous. They target young girls, lure them in with money and drugs, and then secret them away to be raped on mass, sometimes by hundreds of men. Some reports claim that there have been over half a million victims over the past forty years. The debased men are motivated by religious zealotry and simple racism. In the warped minds of these depraved monsters, the girls were “asking for it”. 19,000 were abused in 2019 alone.

READ MORE:  7 Things Before Your First Appointment with a Fertility Doctor

A girl, her name obfuscated in the article for obvious reasons, was placed into a foster home… whose son was her abuser. She was then forced into an Islamic wedding and made pregnant at the age of 15, with, she “claims”, was sanctioned by the local authorities.

What did the Conservatives and Boris Administration do about any of this? The answer: Absolutely nothing. They had a complete majority in Parliament, and they still. Did. Nothing.

Appealing to the Enemy

Some of the terminology and the dogma that have come from the Conservative party has been downright bizarre. Boris is despised by the Labor party and the British Left, which makes all the more infuriating how hard he tries to appease them. He flies rainbow flags, pride parades, promotes LGBTQAAIP and sometimes Y. He appeases Black Lives Matter. Statues of Churchill are defaced, and he doesn’t condemn it.

Why? He will never win these people over. Similar to Trump, these people have decided Boris is the enemy and refuse to hear anything the man might have to say. They vote labor and will never vote Tory. There is no reason to spend his own base to appeal to them, but that’s the strategy Boris went with.

And, clearly, it has failed miserably.

At the beginning of his administration, people compared him to Trump. They were wrong. Donald Trump, for all of his faults, is a man of conviction who stuck to his guns, did what he promised, and spoke his mind. Boris Johnson is a political weasel who comes across to me as weak. Weak in his morals, weak in his convictions, and, now, more than ever, weak politically.

I don’t think he’ll last much longer, and, quite honestly, I don’t think many people will be sad to see him go.