Watch Out For These 5 Metaverse Coins In India 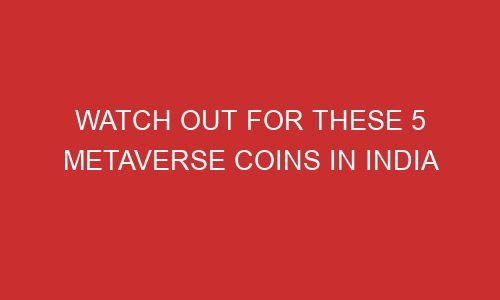 Insights on How to Puppy Proofing Your Home

What Is A Good Research Paper

Is Grain Free Cat Food Worth It?

Sugar-Free Drinks: A Better Way to Satisfy Your Sweet Tooth

Components and Types of Mortgages

All You Need To Know About Exfoliation

Ways To Ditch Plastic for Shop owners: 5 Alternatives To Everyday Use Plastic Items

how to take care of armpit health

How do Personal Loans Impact Your Credit Score

What is the CAT Exam?

Live Mini Baccarat Yet Another Example Of Online Excitement

Tips to Choose Optimal Mattress According to Your Age

360 Photo Booth – Captures Your Loved Ones In 360 Degrees

The side-Effect of Bad Customer Service on Business

We have all heard about cryptocurrency, Web3, blockchain and Metaverse. Despite being in the early stages of its inception, metaverse seems to be all over the internet and social media and has quickly gained the attention of crypto enthusiasts and the IT sector. As a consequence, metaverse coins are seeming to be an undiscovered prospect for 2022 as the concept of investing in cryptocurrency in India grows.

It also helps that Facebook, one of the world’s most powerful internet companies, is betting big on the metaverse. The initiative, dubbed the “future of technology” by the firm, has already cost them $10 billion. In the metaverse, where you will live, play, and interact with others, your imagination is the ceiling. Despite being a digital environment, metaverse will require an economy which will include metaverse currencies, including NFTs and other cryptos which will serve as the backbone of the metaverse economy. Let’s look at 5 of the most promising metaverse crypto currencies to invest in India in 2022.

In terms of playability, Axie Infinity is akin to Pokemon. Axies (the game’s characters) are NFTs, which means they can be bought and sold outside of the game, and users may own, trade, and battle them here. Players may also build kingdoms, participate in treasure hunts, and gather resources. It claims to have the most active and engaged player base of any metaverse game.

READ MORE:  What you need to know about the best crypto trading bots to boost your portfolio

AXS is the game’s native money, and it may be earned via a number of activities. AXS is based on the Ethereum blockchain, hence it has a high gas price while being available for cell phones, Windows, and Mac. It is not, however, free to play, and players must have three AXS to fully engage. It now has a market value of $1.39 billion and is trading at $22.83 as of May 12th, 2022.

Decentraland is an Ethereum-based platform that enables you to buy, sell, or develop virtual “land” that you can explore on your computer, phone, or VR headset. It is one of the most popular and widely accessible cryptos on the list, with MANA as its native coin, and multiple crypto exchanges selling it to new customers. MANA’s value increased 400% once Facebook announced its name change to Meta, generating a lot of interest in it and the notion of the metaverse as a whole. It presently has a market capitalization of $1.37 billion and is trading at approximately $0.7293. MANA uses Ethereum’s blockchain network, which in itself is a valuable currency so you can check out how to buy Ethereum or MANA here.

The Sandbox is an Ethereum-based crypto metaverse project and seems to be a good prospect so far. The value of SAND, the platform’s native token, has consistently increased throughout 2021, eventually reaching the $1 threshold in the fourth quarter and continuing its upward trajectory.

READ MORE:  What you need to know about universal crypto signals

This project is a game with a VR component, but it is mostly based on the creation and trading of NFTs enabled by the SAND token. Another compelling element is the limited currency supply of 3 billion tokens, about 680 million of which are now in circulation.

Highstreet or HIGH isa metaverse project which will enable users to purchase things inside this virtual universe. Furthermore, the gaming platform has already integrated certain Shopify retailers. From the standpoint of the real world (the metaverse), this project has already accomplished what the metaverse technology set out to do. If you’re an investor who considers functionality to be a must, this is a solid option.

Floki Inu, another dog-themed “meme token,” seems to be a real competitor for a competitive and sustainable metaverse cryptocurrency, particularly for those looking for inexpensive coins. The purpose of the project, according to its website, is to mix memes with real-world applications, and it also claims to be developing a game and an NFT marketplace.

Despite the fact that the project is still in its early phases, people have started purchasing FLOKI tokens. Floki Inu presently has no (approved) market capitalization, yet, as strange as it may seem, the coin’s value has surged by a massive 1331 percent since its launch in July 2021.

Metaverse efforts are sprouting up all over the place, but some have far more promise than others. Because the metaverse idea is primarily based on blockchain and crypto, investing in some of these enterprises may be a viable alternative, especially as the NFT buzz looks to be expanding. When it comes to metaverse coins, though, like with any other investment, don’t put all of your eggs in one basket. It’s a good idea to diversify your assets and, more importantly, to buy currencies that you feel have a bright future.