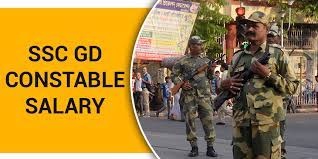 The Staff Selection Commission (SSC) has announced 25271 vacancies for the General Duty Constable position in the Indian Armed Forces under the Ministry of Home Affairs (MHA). Those candidates interested in applying can learn more about this position, including the SSC GD Constable salary, perks and benefits, job profile, roles and responsibilities, and career growth.

The total pay is also subject to deductions, including pension contribution, CGHS, CGEGIS, amounting to 2,369. So, the net salary of a General Duty Constable is Rs. 23,527.

Besides salary, a General Duty Constable is also entitled to various other perks and benefits, including transport, food, field, and security allowances, medical reimbursements, pension, and annual paid leaves.

The 25,000-odd vacancies for the General Duty Constable position are further subdivided into various categories, depending on their posting. These include:

General Duty constables generally start their careers as coast guards or escorts. They take charge of the duties and responsibilities of Sub-Inspectors and Assistant Sub-Inspectors in their absence. Some General Duty Constables may also be called for an investigation of crime scenes. Still, most of them work under SHO’s, following their guidance and instructions.

A General Duty Constable in the Border Security Force (BSF) must protect the Indo-Pakistan and Indo-Bangladesh borders, including preventing border-related crimes, such as smuggling and other activities.

General Duty constables working for the Central Industrial Security Force (CISF) have various responsibilities, including offering security to PSUs and other such organizations, protecting the different Government infrastructure projects, and offering protection to Government officials.

GD constables working in the SSB are responsible for overseeing and preventing cross-border crimes and other illegal activities and protecting the Indo-Nepal, and Indo-Bhutan borders.

GD Constables in the CRPF may hold responsibilities such as overseeing the country’s internal security, acting as a peacekeeping force outside India, including the UN, and protecting candidates contesting for elections.

General Duty Constables in the Assam Rifles may be responsible for providing internal security with the help of the army by conducting various border security operations. Besides this, they also aid civilians by offering them medical assistance and education, especially in remote areas. Also, GD Constables in the Assam Rifles work as a combat force to secure different locations during a war.

So, now that you know the roles and responsibilities of a General Duty Constable and the salaries and career scopes, you can start preparing for the SSC GD exam. For this, you can visit BYJU’s Exam Prep to find the resources you will need. Also, to ace this exam, you will need to prepare rigorously by going through books and other study materials. Besides this, you must also solve as many previous year question papers as possible by timing yourself. You can also mock tests to get up to speed on the concepts.